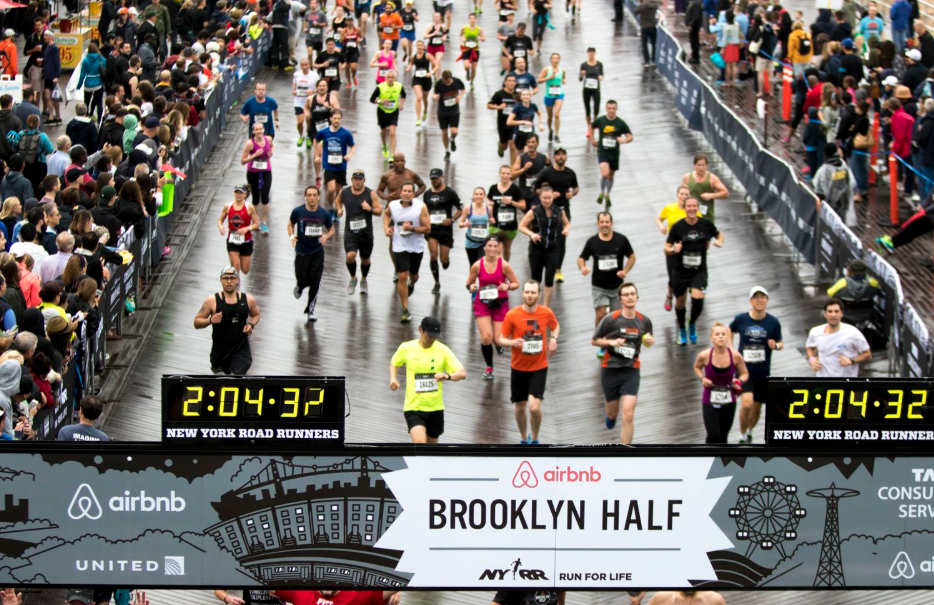 Brooklyn Half Marathon: Every year in late May, the New York City borough hosts around 30,000 runners participating in the Brooklyn Half Marathon, the largest 13.1-mile race in the country. It’s also one of the most popular. This past January, the 2019 race—which takes place on Saturday, May 18—sold out in less than five hours. In 2018, the event sold out just two hours and 17 minutes after registration opened.

For runners still hoping for a bib in this year’s race, you may still have time to raise funds and run for NYRR’s Team for Kids (scroll down to “Run for Charity” for more info). If you’d rather prepare for the 2020 race, however, keep these notes on hand for getting in.

It’s good to know that the Popular Brooklyn Half is very similar to the NYC Half, but faster. You don’t have to run as many hills, there is literally no wind in the second part of the race and your last mile will be much faster because you won’t have to finish in Central Park.

If you’re lucky we will be in the lower 60’s which is perfect for a race like that. Also, be prepared for crowds at the beginning of the race. The Brooklyn Half is a big race with almost 25.000 runners who will all follow their own Brooklyn Half race strategy. If you haven’t found yours yet, let me share my tricks, tips, and advice on the Brooklyn Half:

The First Part Of The Race

The race starts with awesome sights of the Brooklyn Museum and an easy downhill for the first half mile following by another half mile which takes you uphill towards the Grand Army Plaza, then up and down again. Nothing crazy. The second mile is so much fun because you are running a turnaround. Inhale the energy of the other runners you’re facing and exhale your fears. You can do this.

The Second Part Of The Race

Leaving mile 6 behind that’s when your “race” should actually start. You have so much room and time to play with. If you’re following my advice and you’re running the first part carefully and a bit slower, the second part is when you are going to fuel the fire. Once you leave the park around mile 7, you will be on the Ocean Parkway literally until you reach the finish line. This is also where your mind should work hand in hand with your body.

Saturday, May 18, 2019, Brooklyn, NY • Course Map
More than 25,000 runners take to the streets of Brooklyn and cross the finish line each year at the annual running of this race, organized by the New York Road Runners club — which also organizes the famed New York City Marathon each fall, and the New York City Half Marathon in the spring.

One of a series of races in each of New York’s five boroughs throughout the year, this race takes runners on a course that winds past, alongside and through many of Brooklyn’s most famous sights and attractions, including Prospect Park, the New York Aquarium and the Coney Island boardwalk, where they’ll finish the race overlooking the beach.

Fast and largely flat (with the exception of some hilly terrain inside Prospect Park), the race follows a point-to-point route that starts just outside the northeast corner of Prospect Park, one of New York’s true parkland jewels.

Rock And Roll Half Marathon Brooklyn

Do something courageous to support conservation – raise funds to protect nature as you run wild at the Rock ‘n’ Roll Brooklyn Half Marathon on October 14, 2017. Bands, supportive fans, and a beautiful course will greet you. Not only will you be raising money for a great cause, but you’ll also be accomplishing an amazing goal. After you cross the finish line and receive your hefty medal, enjoy the post-race concert and finish line festival.

Reach your own athletic and personal goals while making an impact on our earth, its endangered species and their habitats. You’ll be directly supporting the World Wildlife Fund’s mission to conserve nature and reduce the most pressing threats to the diversity of life.

The New York Road Runners’ Airbnb Brooklyn Half Marathon follows a point-to-point course that starts off along the edge of Prospect Park, near Eastern Parkway and Washington Avenue. From there, the course heads south along Washington and then west on Empire into the park, where runners will make a loop around the park roads before exiting on Park Circle. Next is a long stretch down Ocean Parkway toward Coney Island, where runners will cross the finish line at Keyspan Park, along the boardwalk.