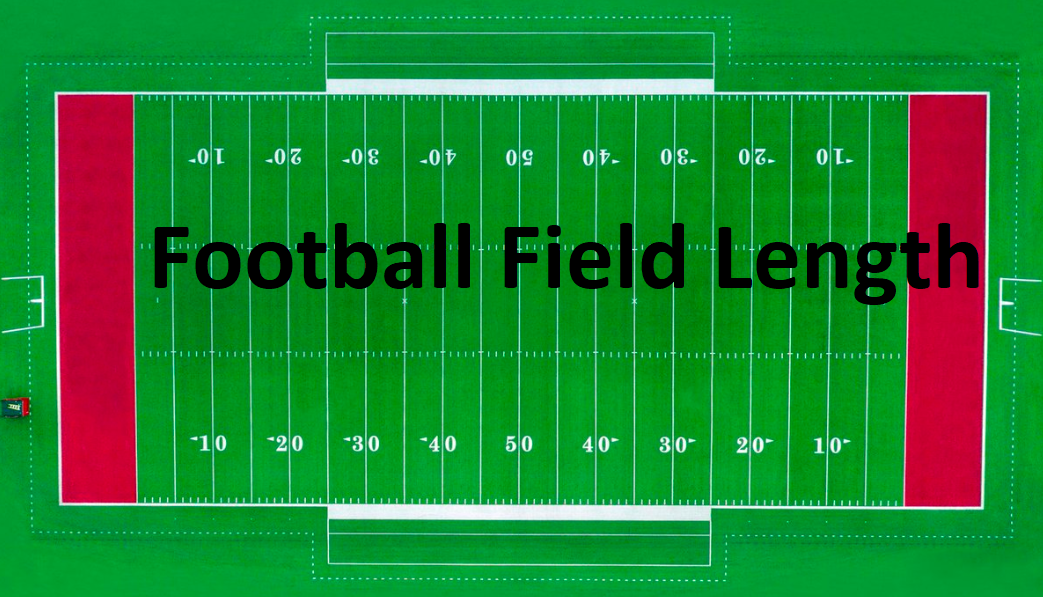 Football Field Length: A football pitch (also known as a football field or soccer field) is the playing surface for the game of association football. Its dimensions and markings are defined by Law 1 of the Laws of the Game, “The Field of Play”. The surface can either be natural or artificial. Artificial surfaces must be green in color. The pitch is typically made of turf (grass) or artificial turf, although amateur and recreational teams often play on dirt fields.

All line markings on the pitch form part of the area which they define. For example, a ball on or above the touchline is still on the field of play, and a foul committed over the line bounding the penalty area results in a penalty. Therefore, a ball must completely cross the touchline to be out of play, and a ball must wholly cross the goal line (between the goalposts) before a goal is scored; if any part of the ball is still on or above the line, the ball is still in play.

Length Of A Football Field

A very common field dimension among the top clubs in the world is 105 x 68 meters (114.8 yds x 74.4 yds). Some famous stadiums and the dimension of their football fields:

The adult soccer goal is 24 feet wide by 8 feet high.

The middle of the field is divided lengthwise by the midfield line.

In the center of the field, there is a 10 yard circle which defenders must stay out of at the start of play.

A rectangular box, 44 yards wide by 18 yards deep, is centered on the goal. Fouls comitted in this area may result in a penalty kick.

The penalty mark is 12 yards from the end line, inseide the ‘penalty area’ where “penalty kicks” are placed.

The goal area is a box box are 20 yards wide by 6 yards deep inside the ‘penalty area’, also centered on the goal. This box marks the area from which a goal kick must be placed.

A one yard quarter circle is marked on each corner of the field, indicating where a player must place the ball prior to a corner kick.

How long is a football field?

The playing field is 100 yards long with two end zones, 10 yards (or 30 feet) deep, on each end. Thus, the total length of a football field measures 120 yards. Yard lines are marked every 5 yards and numbered every 10 yards. Short hash marks indicate one-yard increments on the field.

How many meters in a football field?

How wide is a football field?

So, what is a football field size?

Length Of A Football Field In Meters

The National Football League (NFL), the United States’ premier football league consisting of 32 teams, is one of the four major professional sports league in North America, and the highest professional level of American football in the world. The organization was formed in 1920 as the American Professional Football Association (APFA) before renaming itself the National Football League for the 1923 season. The NFL agreed to merge with the American Football League (AFL) in 1966, and the first Super Bowl was held at the end of that season; the merger was completed in 1970. Today, the NFL has the highest average attendance (67,591) of any professional sports league in the world and is the most popular sports league in the United States. The Super Bowl is among the biggest club sporting events in the world and individual Super Bowl games account for many of the most-watched television programs in American history, all occupying the Nielsen’s Top 5 tally of the all-time most-watched U.S. television broadcasts by 2015.

History Of Football Goals And Nets

Football goals were first described in England in the late 16th and early 17th centuries. In 1584 and 1602 respectively, John Norden and Richard Carew referred to “goals” in Cornish hurling. Carew described how goals were made: “they pitch two bushes in the ground, some eight or ten foot asunder; and directly against them, ten or twelve scores off, other twayne in like distance, which they term their Goals”. The first reference to scoring a goal is in John Day’s play The Blind Beggar of Bethnal Green (performed circa 1600; published 1659). Similarly, in a poem in 1613, Michael Drayton refers to “when the Ball to throw, And drive it to the Gole, in squadrons forth they goe”. Solid crossbars were first introduced by the Sheffield Rules. Football nets were invented by Liverpool engineer John Brodie in 1891, and they were a necessary help for discussions about whether or not a goal had been scored.